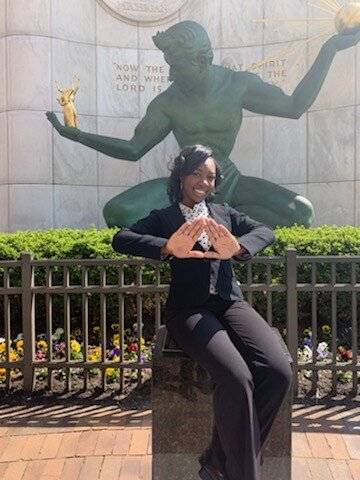 Kristen Corbett of Oak Park was selected for one of the organization’s scholarships. The $500.00 award honors the late Wayne State University Police Officer Collin Rose. He was murdered on a street investigation in Detroit in November 2016. He was pursuing a master’s degree from the university at the time of his death.

“It is an honor to be rewarded with this scholarship for a fallen officer who has attended the same institution and worked within the same community,” Corbett said.

Corbett, 22, said the scholarship will help her offset the cost of tuition at Wayne State University where she is pursuing a bachelor’s degree in criminal justice and psychology.

“Officer Rose and his legacy have motivated me to continue to help the community and create my own legacy by helping troubled youth and advocating for mental health needs," she said.

Corbett maintains a 3.58 grade point average while working and volunteering. After college she hopes to work as a mental health counselor and eventually become an attorney advocating for juveniles.

Foundation President Chris Powell said their organization received more than 20 applications from deserving students around the state for its second annual scholarship. Applicants submitted essays, letters of recommendations and transcripts for consideration. Corbett was selected following a review by the organization’s 13-member scholarship and awards committee with input from the Rose family.

“Our committee was greatly impressed with Kristen and her story,” Powell said of Corbett who ran away from home at age 11 following the death of her father. “She overcame difficulties and found positive role models along the way. That foundation helped her grow into a well-rounded student with a remarkable passion for the community and desire to help and inspire other young people.”

Corbett credits her high school experience with the Detroit Police Department Law Enforcement Explorers Program as a strong and influential period. “It set a prime example of how people are still willing to help others and build them up instead of tearing them down,” she said.

Detroit Police Officer Tania Stribling remembers meeting Corbett as an Explorer a decade ago and said she is impressed with her drive and educational successes.

In 2017 Corbett returned to help Stribling and the explorer program as a volunteer and to mentor new classes of recruits.

“It’s not every day that you see a young person that you have helped, stop and come back to offer assistance,” Stribling said. “Her first-hand perspective says more to the students than we could ever say.”

The Foundation also selected Grace Novak of Royal Oak and Matthew Palmer of Clinton Township for scholarships. Scholarship renewals were also awarded to prior recipients Jacob Fournier of Chesterfield and Michael Cracchiolo of South Lyon.

For more information on the scholarship, visit CollinRoseMemorial.org/scholarship.